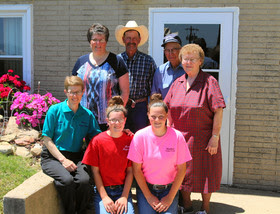 The 4-H program is so much more than just ribbons and trophies for the Mosher family in the small town of Liscomb, Iowa. For Norval and Esther Mosher of Marshall County, lifelong leadership and communication skills are some of the most important things they have gained in 4-H. Their skills and wisdom have been passed along to their children and grandchildren who still work with them on the family farm to this day.

“Our major goal has been to help the kids and grandkids develop and grow,” Norval Mosher said. “We want them to be able to meet people, do things, think on their feet, and manage time. Those are all the things that keep you going.”

Esther Mosher is a Marshall county native with a strong 4-H family tradition. She was a member of the Liscomb Jolly Janes Home Economics Club in which her mother was the 4-H leader. Additionally, her father was the leader of the Liscomb Lively Laborers 4-H Club that she joined later on when clubs became co-ed in the late sixties. After high school, Esther attended Iowa State University and studied home economics to become a teacher. Staying involved with 4-H became a priority for her as she became a 4-H judge on a county, regional, and state level. She started judging in 1954 and still does it at the Central Iowa Fair in Marshall County today.


“The thing that I like about judging is that I try hard to help the individual grow and see how they can improve and to compliment them. I really appreciate helping kids,” Esther Mosher said. “You learn as much as the kids learn. If you are interested in helping young people, it’s a wonderful way to help people.”

Norval and Esther were inducted into the 4-H Hall of Fame on the very first year this opportunity was held in the summer of 2002 at the Iowa State Fair. This was by far one of their favorite memories with Iowa 4-H. For current and future 4-H’ers, they want to encourage them to dive in and participate; especially in communications. Learning how to present yourself was one of the most crucial skills they have gained, and still use today. The other is learning to work with people. To the Mosher family, the ability to work with people is the true mark of leadership. They have passed this on to their grandchildren Lauren and Leah Mosher who just finished up their last years as 4-H members.

“4-H has been a wonderful part of our lives and our family. To think that Norval and I met at Iowa State, and each of our two kids went to Iowa State and now our two granddaughters are at Iowa State. It’s all been because of 4-H.”