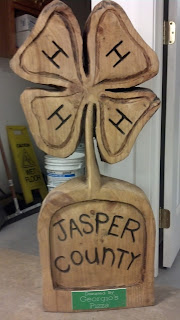 7/25/2013 On this beautiful, cool summer day, Kris Fish Kuhlmann, Executive Director at the Iowa 4-H Foundation, began her journey of another county fair tour for the third week this summer. As the county fair season begins to wind down, she has been to county fair when they are first kicking off, when they are in the peak of their activity, and when they are in the last few hours of closing down. Despite this being the last day of the Jasper County Fair, that didn't diminish their enthusiasm for offering 4-H opportunities.

The flood of 2010 took the Jasper County Fair by big surprise and forced a major remodel of the 4-H Building, keeping them from use in 2011. They are back stronger than ever with an awesome, nearly flood-proof, facility with an all new kitchen that can be rented out for other events.  They also hold an auction for fundraising items (mostly awesome wood carvings, which they hire a carver to do each year).  They use this money for their endowment which funds a lot of things, 2 of which are $500 scholarships offered to graduating 4-H'ers.


"Melted Crayon" art has been at EVERY fair, and it has been very fun seeing the creativity that 4-H'ers are putting into this project. This was apparently a Pinterest movement from last year. These pieces were some of the most creative that we have seen at any fair.


The Taintor Community Church has the lone food stand, but nearly every person in the stand had on 4-H shirts that they sell. We LOVE these shirts! 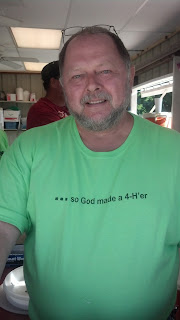 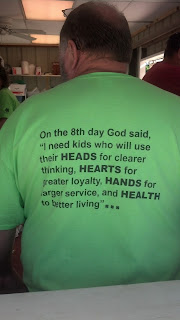 7/25/2013 The next and final stop of the day was the Johnson County Fair. Kris was able to send us a few pictures before she judged the pie baking contest. Let's hope she brings some back to Ames with her! The pies looked delicious. The pie competition is knows as "thee" competition at the Johnson County Fair. Kris served in the shadows of pie and pastry greatness- Barb Davis and Ruth Best, pie making extraordinaires and Michael "Doc" Know, Food Editor for the Press Citizen. The competition was stiff and there were some p-r-e-t-t-y- darn amazing pies. They had to choose the overall grand champion pie, which was tough. In the end, Kris' absolute favore pwas a blackberry and raspberry pie that a youth had mede, resembling an American Flag. That took some significant effort to keep those berries separate and the pie crust in order!


She also had the pleasure of hanging in the company of the Johnson County Fair Queen while judging. 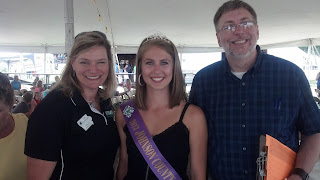 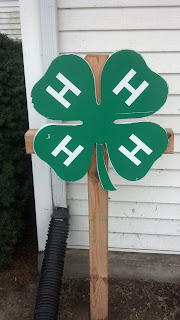 Kris made a stop in the Fair Board office and was introduced to some very passionate 4-H believers.  She had a great chat with President, Dave Schmidt.  Plus, they treated her to lunch from the Cattlemen!  And they are SO fortunate in Johnson County to have their beautiful Extension office right there on the fairgrounds as well! 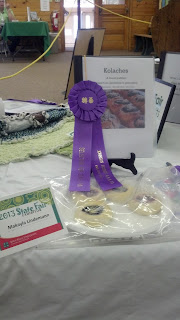 One last tidbit to note – the 4-H Building is in what resembles an old church.  Outside, you will find a cross that is converted into a platform for the Clover.  What an interesting usage of space!  Upstairs AND down were filled with quality 4-H projects.  It was great to see such awesome 4-H work, and so much of it.  Kris found herself some yummy Kolaches as well. The State Fair-bound ones almost ended up going home with her!
~~~~~~~~~~~~~~~~~~~~~~~~~~~~~~~~~~~~~~~~~~~~~~~~~~~~~~~
7/26/2013 Judy Hertle, Endowment Committee member, was a delightful hostess as Kris made her way through the Benton County Fairgrounds. She made sure that Kris saw it all, and of course, they started and finished with the 4-H Exhibits Building. "Unmask the Opportunities" was a present theme in every club's booth. It is so fascinating to learn how each county does things differently, but does well however it suits them. For example, some counties are committed to having "Club" displays, while others do displays by project area. Yet, others have a separate State Fair display and some incorporate those into the Club Booths. Some utilize the State 4-H Conference theme, others use their County Fair theme, and some use no theme at all. Some are judged for booth appearance and expect 4-H members to "staff" their booth at all times. Kris says, "I just truly appreciate seeing the blend of how whatever is done, works for them, and they are believers in it "being the best." 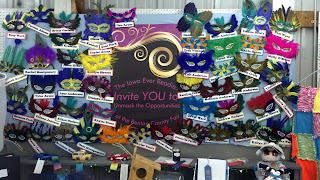 She was fortunate to get to see some of the Share the Fun acts- a gymnast, singer, and piano player, as well as some of the $15 Challence, Fashion Review and Clothing Selection. One young 4-H'er purchased an entire Justice outfit second-hand for $5.68! She is truly learning great bargain shopping talent and skill from her 4-H exposure! Kris also had the opportunity to enjoy the hospitable 4-H company of Greg Wolston, Jacki Luckstead, Michelle Thomsen and summer staff person Kali.
She was also interest in the "heardsmanship" award given at their fair, and posted on the award board outside their livestock buildings. Each year, the Extension Council "pops in" to randomly interview the 4-H'ers. Someone much ALWAYS be with the livestock, so if you or someone on your behalf is not there, you get docked points, and ultimately, that will not help you win herdsmanship. It shouldn't be a surprise that one of the projects in the 4-H Exhibits Building was a show box!
"The grandstand and race track, even the midway, having been a re-peat for this fair for 4 years, was reminiscent of something I remember seeing as a child. It almost felt like an Oasis of Disney World right in the middle of Vinton, Iowa," says Kris.
The next stop for Kris is the Grundy County Fair this evening. She will be present at the Drew Scott Memorial Sheep Show and Scholarship Presentation. Check back with us on Monday for her experience of Grundy County.

May 08, 2020
Molly Foley never imagined the path her past five years has taken. What started as a summer internship in Washington D.C. brought her to now work for the Governor of Iowa. What’s more evident in her story is the foundation 4-H built to help her succeed on a daily basis.

Foley was a member of the Palestine Peppy Pushers in Huxley, IA. She was active in many project areas including horse, beef, sheep, food & nutrition, communications, citizenship and leadership. An initial standout memory for Foley was the Junior Sheep Showman class in 2003 at the Story County Fair. She had been practicing sheep showmanship all summer and was disappointed to be the first one pulled out of the line-up by the judge. (Normally means you are not in contention for the top of the class). After lining up the rest of the junior showmen, the judge began explaining to the crowd about the class.
“The last sentence out of his mouth is one I still remember to this day: ‘I’m going to go with the young lady all …
Post a Comment
Read more

May 14, 2020
When one thinks of 4-H, they might not jump to music. However, 4-H allows youth to develop skills that help in areas of creativity and performance. Lindsay Mickelson was a Dayton Tiger 4-H’er from Webster County. Involved in several project areas, she loved to show pigs at county and State Fair, cattle for a couple years, photography, baking and Share the Fun.
“I have so many great memories from 4-H. From playing cards in the cattle barns with friends to earning trophies for raising a fine-looking pig,” says Mickelson.
“Fair time was always my favorite time of year because it combined my two favorite things: hanging out with friends and tending to the animals. I can remember the first year when I started 4-H, we had our calves so tame we would lay on them in the barn, just because they would let us. Half the time the calves couldn’t care less, as long as they had food and water, they were happy.”
Mickelson identifies 4-H as a steppingstone growing up, teaching her how to communicate…
1 comment
Read more

April 07, 2020
If you want someone with a wide variety of 4-H experience, Kallen Anderson is your person. Anderson served as an officer in her Lost Grove Leader 4-H club from 5th grade on. As a Webster County 4-H’er she was on the County Council, the Central Area Council, State 4-H Council and participated in the Citizenship Washington Focus and National Congress trips. For projects, Anderson heavily participated in food and nutrition, clothing, fashion review, clothing selection, personal development, horticulture, cat, communication events, and home improvement project areas. She had a few years of showing sheep and bottle calves thrown in there as well.
“4-H has impacted me in so many ways, from the friends I’ve met, skills I’ve learned, and the experiences I’ve had,” Anderson says. “However, I think the most impactful thing 4-H taught me was how to break the mold. How to be different than those around me and be confident in that. 4-H gave me the confidence to actually be myself and be who I wan…
Post a Comment
Read more