Molly Foley never imagined the path her past five years has taken. What started as a summer internship in Washington D.C. brought her to now work for the Governor of Iowa. What’s more evident in her story is the foundation 4-H built to help her succeed on a daily basis. 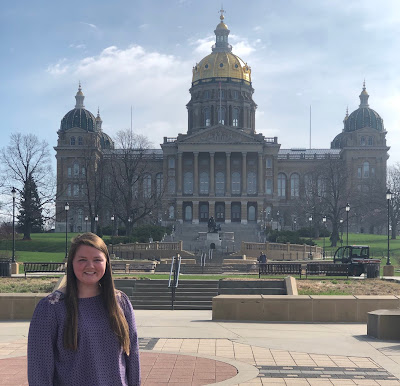 Foley was a member of the Palestine Peppy Pushers in Huxley, IA. She was active in many project areas including horse, beef, sheep, food & nutrition, communications, citizenship and leadership. An initial standout memory for Foley was the Junior Sheep Showman class in 2003 at the Story County Fair. She had been practicing sheep showmanship all summer and was disappointed to be the first one pulled out of the line-up by the judge. (Normally means you are not in contention for the top of the class). After lining up the rest of the junior showmen, the judge began explaining to the crowd about the class.

“The last sentence out of his mouth is one I still remember to this day: ‘I’m going to go with the young lady all the way on the end.’ I quickly looked down to the other end of the ring, and to my giant surprise, the 4-Her on the other end of the line was a boy. It was me - he was talking about me!”
Foley says, “That moment, that feeling; that lit a spark in a young 4-Her’s heart and that is a memory I take with me wherever I go.” 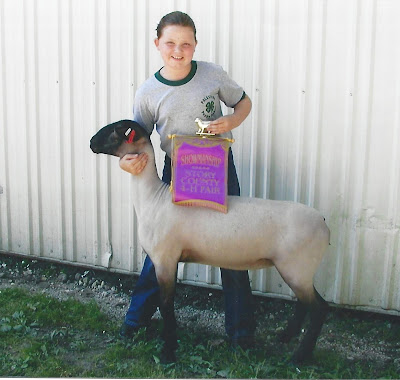 Foley has several 4-H memories that have left an impact on her life. Time at the Iowa State Fair is one of them.

“I’ve always had a love for music and singing, which meant I also spent time in the 4-H Building at the State Fair as a part of “Share the Fun” performances,” says Foley.

Her love of singing also brought her to a unique venue on the Fairgrounds – the main livestock pavilion. For several years Foley sang the Star-Spangled Banner at the 4-H Beef Parade of Champions. “I can still picture it - standing in the middle of the massive ring, microphone in hand, cowgirl boots and 4-H shirt on, signing for thousands of Iowans. Definitely a memory for the history books.”

Foley firmly believes that her time spent in 4-H made her the person she is today – personally and professionally. “One of my favorite 4-H activities was Communications. It was actually one of the driving factors when I pursued my Agricultural Communications degree at Iowa State!”

She started doing working exhibits with fellow Palestine Peppy Pushers and then found her niche in educational presentations. “The impact of the 4-H communications project was strong. From a young age, I learned how to confidently speak in public which eventually grew into a major career interest of working with others and helping to educate and engage.”

Foreshadowing her current career, Foley was selected to serve on the State 4-H Council for two terms and attend National 4-H Congress in Atlanta, GA. Both large leadership and citizenship experiences.

“With a passion for agriculture and public service, 4-H gave me the tools I needed to be able to communicate effectively, educate others on important topics, and be able to think quickly on my feet in any situation - all skills I now use on a daily basis!” 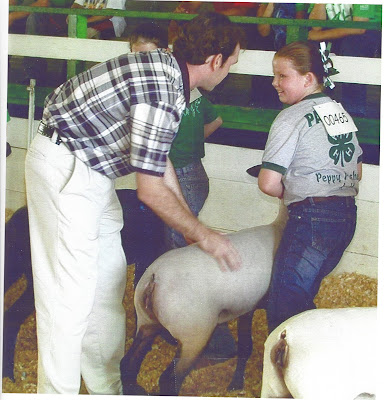 Like mentioned, Foley went on to Iowa State and earned two degrees from the College of Agriculture and Life Sciences: Agricultural Communications and Public Service & Administration in Agriculture. The summer before her senior year she interned for Senator Charles Grassley in his Washington office.

“Ask any DC resident - our Nation’s Capital is one of those places that you either absolutely fall in love with, or a place you only want to visit on vacation. I, of course, fell into the former category and made Washington, DC, my home the summer after finishing my undergraduate degree.”

Before graduating from Iowa State in 2014, Foley knew she wanted to pursue a degree specifically in public service and policy. She earned her master’s in public administration from George Washington University in 2016. She had the opportunity to work for Senator Grassley full time as she went to school in Washington D.C., working for his office until December 2017 when she was offered a job with the United States Trade Representative.

As a part of the Executive Office of the President and the White House, Foley spent more than two years working on U.S. trade negotiations and trade policy. Foley says, “Two of the biggest moments in recent trade policy history both happened in the same week this past January. It was an absolute honor to be a part of the amazing team of negotiators that were able to accomplish both agreements.”

In March 2020, Foley’s career path brought her back to Iowa. She now serves as the Director of Boards and Commissions for the Governor of Iowa. “I’m honored to be a part of the Governor’s team and excited to be back in the great state of Iowa,” said Foley. 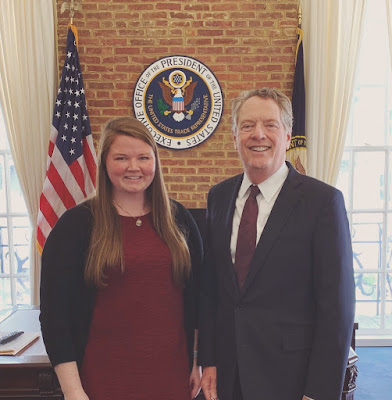 Foley adds the 4-H program is a great way to learn what sorts of industries you might be interested in when you graduate. She encourages 4-H’ers to use their time in 4-H to figure out what they are passionate about or what they enjoy doing.

“I had the chance to meet some of my closest friends through 4-H. We’ve graduated from college together, we’ve made career accomplishments across the world, and we’ve even celebrated weddings and children together! The opportunities in 4-H are second to none, we all know that. But also remember it’s the people that make the organization one of the best in the country.”

To see a snippet from Foley’s past, check out this short story IPTV did when she was a senior 4-H’er: https://www.youtube.com/watch?v=_8Hgqdux6GI