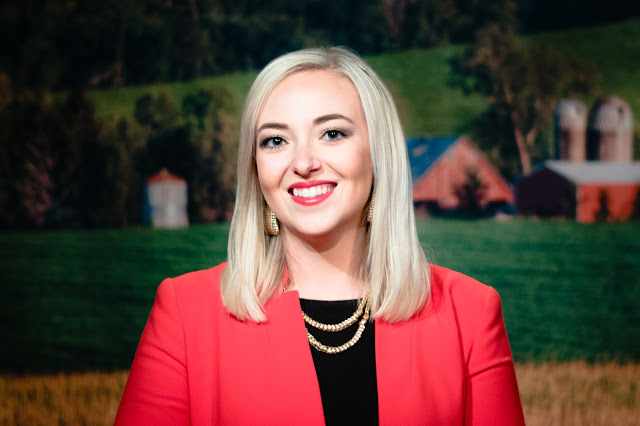 At the young age of 23, Louisa county 4-H alum, Delaney Howell was hired as the first female host of IPTV’s market to market. Since then, she has stayed involved in a variety of projects related to agricultural broadcasting.

“I actually started out college as an agricultural education major and it wasn’t until my junior year that I decided to make the transition to just a general Ag degree with a broadcasting minor,” said Howell. “After working for two years at my college town’s local radio station, KNIM “the Ville”, it turns out I loved it and I found a place where I felt like I could still educate people through the information I was sharing, but it gave me more of a “voice” and platform than I felt teaching would.”

As for her involvement in the 4-H program, Howell’s roots run deep in the small town of Columbus Junction in Southeast Iowa. It was within the Shooting Stars 4-H club where she found her love of livestock exhibition and had great opportunities to step up in her club as a leader, taking on every officer position at least once during her 4-H career. Howell was additionally selected to reign as the Louisa County Fair Queen in the summer of 2012. She continues to advocate for the 4-H program that helps students to think outside the box, think for themselves, and take responsibility for their actions.

“4-H was a really important part of my life growing up because my family was very active in showing livestock at our county and state fair, as well as the projects that were judged at county and state fair. It’s funny because at the end of either 4th or 5th grade, I was elected as our chapter’s president; looking back the other kids probably thought it was just funny to put someone so young in charge, but it taught me a lot about being a leader from a very young age!”

As a successful businesswoman, Howell states that she still learns something new every day. Being able to adapt to new things is something that will make you much more efficacious as you grow older. She wants to tell the next generation to not be afraid to follow your passion. If you are truly passionate about something, you can find the determination to make it work.

“It can be hard to find exactly where you fit in for a career, but the best advice I would give is to keep trying new things; take the job or at least take the interview and see what you think before you make a judgement about someone or something before you’ve even given it a chance. If nothing else, you may meet someone who will open a door for you that you never thought was possible.”