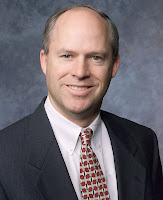 4-H leads to multiple paths of success; just ask Terrence (Terry) Tobin. Tobin has an extensive background with 4-H and is still making use of the skills he learned as a 4-H'er in his current position as director of Principal Enterprise Capital in Des Moines.

“Joining 4-H was just what you did in our family,” said Tobin. “My parents even met through 4-H.”

Tobin, from New Market, Iowa, was a 4-H member throughout his youth. He served as a state 4-H officer during that time. Tobin credits leadership and citizenship skills that he learned through 4-H for his successes in life.

“4-H provides knowledge and experiences in a manifold of areas,” said Tobin.

Tobin remains a strong believer in giving back to his community, a value instilled through his 4-H involvement. Tobin is not alone; a recent study by the Institute for Applied Research in Youth Development at Tufts University found 4-H’ers are 25 percent more likely to contribute to their communities than other youth.

Tobin has served on a variety of boards including the Iowa State University Foundation Board of Governors and Department of ISU Political Science Alumni Advisory Committee.

Tobin says a highlight of his adult 4-H career was serving on the Iowa 4-H Foundation Trustees board for six years. He served as president of the board during his term and led the Imagine Together Capital Campaign, raising nearly $2.5 million to support 4-H.

“It was a way to give back to all 4-H has given me personally and my family,” said Tobin of his time with the Iowa 4-H Foundation.

“I was lucky to work with a very talented group of people on the Foundation Board,” said Tobin.

“4-H is many things to many people. It helps our young people to build community leaders for tomorrow,” said Tobin. The research agrees with his statement; Iowa 4-H’ers' survey responses show solid evidence that youth involved in 4-H develop the characteristics of competent, caring, contributing, confident, connected and capable individuals.